Posted by ideasman at 8:57 PM No comments:

How to use Project NOAH 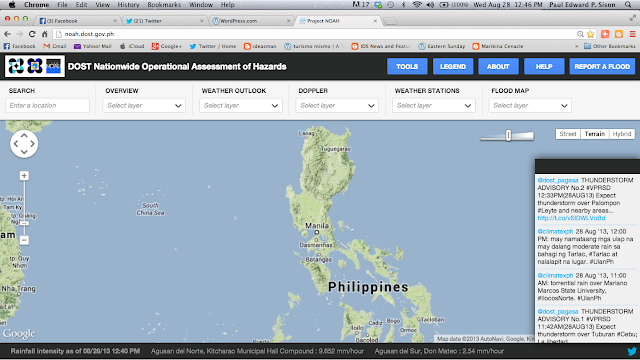 This Project NOAH website or application software helped us save lives during the last habagat induced by Typhoon Maring.

The beautiful thing about it is -- anyone can access it and be empowered by the timely information it relays. Whether via a desktop, laptop, notebook, netbook, tablet, and smartphone ... you have vital information at your fingertips.

It is really very easy. You just have to familiarize yourself with what "tools" will give you the information you need.

First is to enter the city or location in the Search box.

With the next pulldown menu "Overview", the most used is the MTSAT which shows you a satellite image of the weather disturbance affecting the country. Go ahead click on the others like Rainfall Contour, % Chance of Rain, and others. Explore these items.

The "Weather Outlook" pulldown menu gives you just that -- the weather outlook, the rain forecast, etc. Icons will appear on the Philippine map and just zoom in on the location you are interested in and click on the sun or cloud or whatever icon hovers over that location.

The "Doppler" menu is very helpful in showing you if rainclouds are passing over the location. Ex. for Metro Manila, we click on the Subic and/or Tagaytay Station. The other stations are for areas in Visayas and Mindanao. The clouds on the screen are color-coded on what amount of rain are in those clouds. Please refer to the Color Scale on the sidebar.

The next most-used is the Rain Gauge which helps us determine weather the water level will rise or recede some more. For Marikina, we look up the rain gauges in the Marikina Watershed area, namely the ones in Mt. Oro, Montalban (north); Mt. Aries, Antipolo (east); and Bosoboso, Antipolo (southeast). The rain that falls in these mountains will all flow down into the Marikina River. The values shown are taken every 10 mins. so the proper way to read the amount of rainfall per hour is to add all 6 values contained in an hour (mm/hr).

The last menu is the "Flood Map" menu which contains historical flood maps, e.g. 5-100 year floodmaps, Ondoy Flood Map, etc. The most unique feature here are the Flood Inundation Maps of Marikina River, Pasig River and San Juan River. This is in real-time and will show you if water has overflowed the banks of the river and upto where.

I hope this helps you discover how Project Noah can help you, your family, and your community.

Download and explore the Project NOAH website or application now!
Posted by ideasman at 11:38 PM No comments:

Are you on the lookout for a place that is clean and peaceful to reside in or to build your second home?

Are you thinking of setting up a new business and scouting for an area that is safe and ensures generous returns for your investment?

Are you searching for a new place to visit that offers an enjoyable respite or a wholesome leisure time with family and friends at a very affordable price?

Make it Marikina! is a place marketing campaign of the city government of Marikina to attract new residents, additional investments, and more visitors.

Marikina is building on its brand equity as a dynamic governance model having recently been adjudged as one of the Top Ten Most Competitive Cities and among the Top Three in Economic Dynamism by the National Competitiveness Council (NCC) of Guillermo Luz.

It is hoped that the success of Make it Marikina! will further expand the tax base and market base of the city and make it more economically dynamic in terms of business registrations, employment, and financial institutions.

More taxes paid to the government means more funds for development projects that improve the way of life of Marikenyos, thus attracting more well-to-do families into relocating in Marikina. This results in more customers for local products and services, and, more highly skilled people entering the labor force. This productive cycle contributes to Marikina’s growth – a vibrant local economy and residents with more disposable income.

Actually, the Make it Marikina! place marketing campaign, conceptualized three years ago (2010), is also a challenge to the city government to ensure continuity of its good governance best practices at a time when the new administration of Mayor Del R. De Guzman, Vice Mayor Jose Fabian Cadiz, and Rep. Miro Quimbo took over the reins of government from the Fernandos with their “Tunay na Kaunlaran, Tao Naman” governance philosophy.

Anticipating operational slack in the transition period, Make it Marikina! was launched to bridge the gap.

The success of Make it Marikina! in attracting new residents, additional investments and more visitors will be used as a measure to gauge the effectiveness of the programs of the city government.

There is a very logical rationale for this. The real measure of good governance is if you are able to convince other people – those from outside – to live in your city, to invest in your city, and to visit your city for some rest and relaxation.

It is a de facto stamp of approval.

Many people can claim that theirs is the best in terms of local governance – but if people do not want to live, do business, and visit your city … then, no amount of self-glorification will enhance your image and positioning.

Recently, a “Make it Makati” campaign was launched by Ayala Land, I believe, for their new township development at the Santa Ana Racetrack. It eventually evolved into something similar to “Make it Marikina!”  This campaign by the private sector and its eventual adoption by the city is a validation that Marikina is on the right track and doing the right thing.

The quality of life in Marikina has improved a lot with each administration contributing to how the city has been looked upon as a model by other local governments.

But real prosperity and development for me is when Marikina becomes the preferred city for new residents … new investors … and visitors by 2019.

There is so much more to discover about Marikina inspite of the many positive testimonials already heaped on it.

Place marketing is a highly competitive undertaking because there are thousands of cities and municipalities jostling and positioning for your attention and hoping to influence your decision as to where to relocate and reside, where to invest and set up shop, and where to visit.

With Marikina, you can’t go wrong … a Galing Pook hall of famer in several categories as awarded by the Asian Institute of Management (AIM) because of its people – disciplined, productive, and friendly.

Marikina is clean, peaceful and orderly; has productive and industry-friendly residents; and is a joy to visit because it is a walk-able and bike-friendly city.

What’s more – it is your city because you come first.

See for yourself and experience how people are valued in a place where its “Tunay na kaunlaran, tao naman” governance philosophy is truly lived.

Come on, folks, Make it Marikina!
Posted by ideasman at 7:51 PM No comments:

Check out my other BLOGS